The Wet Tropics of Queensland World Heritage Area extends for about 450 km between Cooktown and Townsville, along the north-east Queensland portion of the Great Dividing Range. It consists of nearly 900,000 ha of Australian wet tropical forests, including open eucalypt forest, wetlands and mangrove forests.

The area was granted World Heritage listing and protection by UNESCO in 1988, in recognition of its exceptional natural beauty, biological diversity, evolutionary history and cultural significance.

Biological Diversity:
The Wet Tropics is renowned for its amazing and unusual wildlife, from colourful and noisy birds, tiny frogs and curious possums to tree-climbing kangaroos.  Many of these species are unique to the region. The Wet Tropics is recognised as a biodiversity hotspot, as it contains an extremely rich variety of Australian animals and plants, many of which are endemic, rare or threatened.

Evolutionary History:
The Wet Tropics contains 16 of the 28 ancient lineages of  primitive flowering plants, more than anywhere else in the world.Wet Tropics rainforests are surviving fragments of the primordial Gondwana forests and are among the oldest rainforests on Earth.The earliest known terrestrial plant forms were from the Silurian period more than 400 million years ago.

Cultural Significance:
The rugged forest landscape, with its waterfalls and gorges, has been a part of Rainforest Aboriginal life since time immemorial. Stories from the dreamtime include the plants and animals that are a part of their cultural heritage, and many areas are significant cultural sites where traditional ceremonies are still held.

The Wet Tropics Rainforests has two distinct seasons, the 'wet' and the 'dry'. Over 60% of annual rainfall arrives during the 'wet', which is from December to March, making this the best time of year to witness the beauty and might of our rainforest waterfalls, including the 260m (853 feet) Barron Falls.

Rising from the rainforests of Mount Hypipamee National Park, the Barron River winds its way 60km across the Atherton Tablelands, through the Barron Gorge National Park before descending down the 260-metre high Barron Falls and reaching the coastal lowlands of Cairns.

The river's original Aboriginal name is Bibhoora. The river gained its current name in 1875 when two police sub-inspectors, Johnstone and Douglas, named it after Thomas Henry Bowman Barron (c1835 – 24 June 1882), chief clerk of police in Brisbane. The Djabugandji Bama (Aboriginal people) are the Traditional Owners of the area known as Djirri Nyundu Nyrrumba, which includes Barron Gorge National Park.

Geologists believe that just behind Barron Falls, Barron River was joined by the Mitchell and Clohesy Rivers. This created a more powerful flow in front of the point where they joined and therefore gouged out more of the gorge at that location, rather than behind it. There are only about three waterfalls in the world that were created in this fashion!

A small hydro-electric station, the first underground power station in Australia, was built in 1935 to harness the immense force of water surging over Barron Falls. It was replaced by the Barron Gorge Hydro-Power Station further down the gorge in 1963 after the construction of the Tinaroo Dam upstream on the Barron River. Only by a release of water or during flood events can tourists today have some idea of the former grandeur of the falls.

Bird's-nest fern and elkhorn ferns grow amongst Candlenut, Corkwood, Native olive and False Red Sandalwood trees at the bottom of the gorge.

Tully Gorge National Park is part of the Wet Tropics World Heritage Area and one of the wettest areas of Australia. The Tully River is 130km long from its source in the Cardwell Range. From here it plunges down the Cardwell Range and through a densely forested gorge.

The Jirrbal and Gulnay people are the Traditional Aboriginal Owners of this area. The area is rich in cultural history and has many significant sites and story places and they continue their cultural obligations today.

In the 1950s, Koombooloomba Dam on the Tully River was constructed to provide hydro-electric power. Water is captured from the dam and released back into the river through the Koombooloomba hydro-electric station. From here the water flows approximately 13km to the Tully Falls Weir, just above the Tully Falls. This creates perfect conditions for a white water adventure like no other. With a unique combination of high rainfall and a power dam release every day, the Tully River is regarded as the best white water rafting experience across Australia and New Zealand.

The area's vegetation includes tropical rainforest, open eucalypt forest, wetlands and mangrove forests. Beyond the picnic and camping area, the Flip Wilson Lookout provides a great view of a series of rapids on the river.

The headwaters of the Russell River lie in the shadow of Mount Bartle Frere, Queensland’s highest peak. This short river passes east of the town of Babinda, joining with the Mulgrave River before entering the sea.

Josephine Falls is a popular recreation site for visitors. It begins as a trickle high on the south-east side of the summit of Bartle Frere and ends as a substantial creek flowing into the Russell River. A walking track leads visitors through lush tropical rainforest to viewing decks overlooking Josephine Creek and falls. From here you can enjoy excellent views and opportunities for photography. Swimming is also popular here as the water from Josephine Falls flows over a large smooth rock to form a natural waterslide. Flash flooding (rapidly rising water) is common during wetter months so please exercise caution before entering.

Golden Hole (Biggs Recreation Reserve) is located on the Russell River, 1.5 km from the Josephine Falls turnoff. It is located at the foot of Mt Bartle Frere, and has great views of Queensland’s tallest mountain. This recreation area has a large open grassed area with a covered picnic table. A toilet block is located nearby. The river is close by and is a popular fishing spot. Swimming and canoeing are also popular.

Ernie Raymont is a Ngadjon-Jii Elder and was one of the last Indigenous people to actually in live in the Malanda rainforest. He takes us on a walk through the forest showing us some of the useful plants and animals.

Things to look for:

Brilliant Rainforest Butterflies
There are two iconic and strikingly beautiful butterflies in Australia’s Tropical Rainforests, the electric blue Ulysses and the dazzling jade, Cairns Birdwing. The Ulysses Butterflies can be seen in Tropical North Queensland year-round, although they are most abundant during the ‘green season’ from December to March. The Cairns Birdwing (Ornithoptera priamus) has a wingspan of up to 20cm, making it Australia’s largest butterfly!

Cassowary
Standing at two metres tall and weighing in at up to 85kg, the Southern Cassowary claims its place as Australia’s heaviest, flightless bird. This unique species is endemic to Australia’s Tropical Rainforests and is classified as being endangered; in fact, there are only believed to be between 900 and 1,500 of these majestic birds left in the wild.Cassowary’s can live up to 40 years of age and are considered a keystone species in Australia’s Tropical Rainforests. 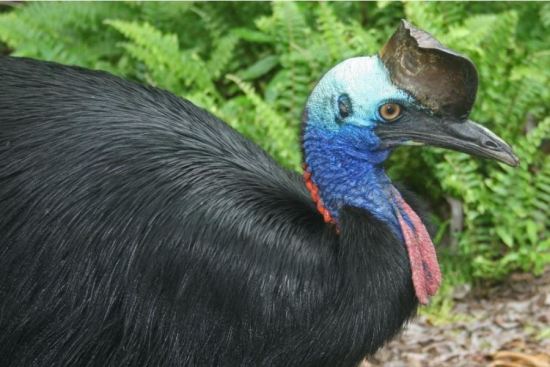 Aboriginal people sustainably managed the rainforest for thousands of years, and the cassowary was appreciated as a food resource and for its seed dispersal role because it meant an ongoing supply of new fruit from new trees. The cassowary is culturally significant to the traditional owners of the tropical rainforests. It is integral to their culture, customs and values, appearing in important traditional stories, ceremonies and dances.

Whitney Rassip – Djiru “Growing up I was told that Gunduy (Cassowary) is very important to us rainforest people, my father, and grandfather’s family. But I didn’t experience that feeling until I started learning my country, now I realise, the connection and role of Gunduy in the rainforest. Every time I see a Gunduy I know that my culture is still alive, which is why I try to do as much as I can to ensure its survival, now and into the future.” 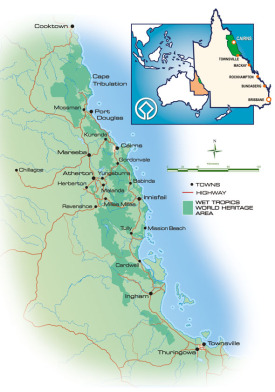 The Wet Tropics of Queensland stretches in part from Townsville to Cooktown, running in close parallel to the Great Barrier Reef.

The Wet Tropics was inscribed on the World Heritage list because:

• It is the oldest tropical rainforest on earth.
• It has Australia’s greatest diversity of animals and plants.
• It protects areas where rare and threatened species still survive.
• It contains areas of exceptional natural beauty 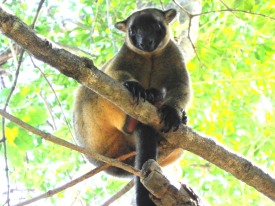 The Wet Tropics Management Authority protects, conserves
and promotes sustainable use of the Wet Tropics World
Heritage Area through strong partnerships with community,
industry and Rainforest Aboriginal people for the enrichment
of all. More info >

The Wet Tropics Management Authority provides for the implementation of Australia's international duty under the World Heritage Convention through the following core activities.
More info >

WHAT YOU CAN DO

• Put rubbish in the bin or take it with you - pack it in, pack it out
• Stick to walking tracks
• Camp in designated camp sites
• Leave domestic pets at home
• Resist the temptation to feed wildlife, it harms them
• Most of all – enjoy our World Heritage treasure! 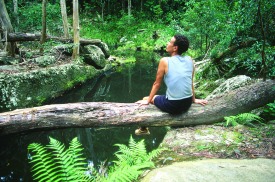